The Earth crust represents less than 1% of the volume of our planet but is exceptionally important as it preserves the signs of the geological events that shaped the Earth. This thin layer is the place where the natural resources we need can be accessed (e.g. minerals, critical raw materials, geothermal energy, fresh water, hydrocarbons). For these reasons, a thorough understanding of its structure is crucial for both scientific and industrial future activities.

In recent years, thanks to the increasing availability of seismic/seismological data and to satellite missions, the Earth crust has been thoroughly investigated and modelled at global and continental scales. However, despite this progress, the crust remains poorly understood in many regions as global models are often too coarse to provide detailed information about the regional and local dynamics.

Potential field methods, which exploit gravity and magnetic data, are a powerful tool to recover information on the Earth’s crust structure. A wide variety of gravity and magnetic data in fact have been nowadays collected at near surface altitudes in most regions of the world. These measurements, if properly combined with global satellite data can be used to refine at regional/local scale the modelling of crustal structures, depicting the boundaries between geological units and stratification of the crust.

To fully exploit these satellite-derived and terrestrial data ad-hoc physics integrated approaches, to reconcile all the measurements, are required. A promising solution to this issue is represented by the joint processing of both gravity and magnetic fields observations, possibly incorporating the available geological knowledge and constrains coming from seismic acquisitions.

In the XORN project an innovative, fully integrated approach will be developed to perform a complete 3D joint inversion of gravity and magnetic fields data, constrained by seismic and geological a-priori information. The developed algorithm will be used within the project to recover a 3D regional model of the Earth crust in the Mediterranean Area in terms of density and magnetic susceptibility distribution and in terms of depths of the main geological horizons.

credit: ESA/Planetary Visions from the GOCE Exploitation for Moho Modeling and Applications (see Reguzzoni and Sampietro, 2015).

The observations of the gravitational field can be profitably exploited to infer the density distribution within the Earth crust by means of so called gravity inversions.

Typically gravity inversion methods can be divided into two main categories: namely solutions aiming at deriving the 3D density distribution in a given volume or at inferring the geometries of surfaces separating geological units.  The former solutions have the disadvantage of producing unrealistically smoothed density distribution, while the latter, taking density distribution for granted, can entail large errors and approximations.

The XORN approach is different. In XORN we will suppose to have, as it always is,  an initial geological model characterized by an a-priori (even rough) knowledge of the main geological horizons and their densities.  We want to modify this initial model in order that its gravity response on the surface fits the observed gravity field.

In doing this will always preserve the original intrinsic characteristics of the a-priori model, i.e. we want to obtain clear shapes, with sharp boundaries between different layers and structures, and with realistic densities (including their local variations). In other words, we want to estimate a new geological model that could be designed by a structural geologist and that fits the gravity field on the surface.

Two inversion strategies will be considered in XORN: a quick look algorithm , based on continuous transformation functions will be derived using the analytical relationships between the magnetized layers and the magnetic field measured outside the sources. This method based on Fast Fourier Transform is in principle extremely fast.

In a second step, this first order result at different depth layers will be used as a prior information to build an equivalent mesh of magnetic dipole sources placed within the crust.

This more conventional approach will be used to refine the vertical resolution of the 3D inversion. Both block processing chains will be tested with thorough end to end simulations using realistic synthetic data. 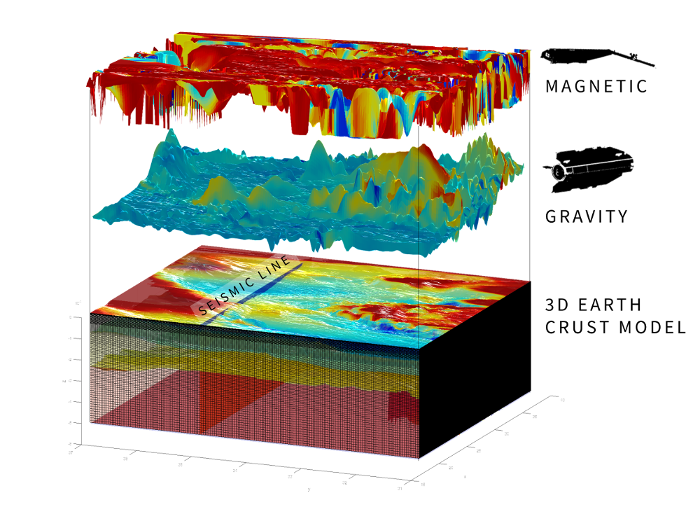 The inversion of gravity and magnetic data are, among other geophysical investigation techniques, a valuable source of information about the structure of the Earth crust at regional scale. However, these techniques have several drawbacks from the mathematical point of view: namely, the solutions are not unique, i.e. there are several density/susceptibility distributions which generates exactly the same observed gravimetric/magnetic field respectively; the inversion is unstable, meaning that high frequency errors in the observed field are in general amplified when the inversion is performed.

An ideal solution to overcome these issues consists in jointly integrate as many geophysical techniques as possible. XORN aims, not only to jointly invert gravity and magnetic data, but also to further constrain the solution integrating information coming from interpreted seismic observations and qualitative geological knowledge (properly weighed by their reliability).

The innovation of the proposed approach is that we aim at formalizing the expectations and knowledge of a geologist (as input to the method), designing an inversion scheme that adjust the given model in order to fit gravity and magnetic data. The basic idea of XORN is to mimic, by means of a Bayesian approach, the work of an expert operator which modify, according to his/her experience an a-priori geological (and conceptual) model to fit geophysical observations, thus creating de facto a sort of Artificial General Intelligence.

The Mediterranean Area is fundamental for many scientific and industrial applications. From a scientific point of view, its deep understanding is in fact crucial to better model the African-Eurasian active plates tectonics. Moreover, recent industrial discoveries have paved the way to activities aimed at an optimal exploitation of natural resources. For these reasons, the area has been selected as real case study application for the joint gravity and magnetic inversion with the objective to retrieve a complete 3D regional model up to the Moho depth. XORN results on the Mediterranean case study will represent an update and improvement of the current models of the areas, retrieved by fully exploiting the variety of satellite and terrestrial observations never jointly used before.

Within this regional Mediterranean case study particular attention will be given to the bathymetric layer thus defining and testing a strategy that could potentially be applied worldwide to improve our knowledge of this layer that is fundamental for every application aiming at studying, conserving and sustainably using the oceans, seas and marine resources.

Get notified about new articles and results